If Ukraine was run like Shakhtar (and vice versa)

The benefits to Ukraine’s ruling classes of meritocracy ought to be clear... 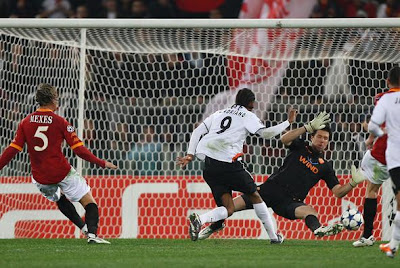 For all the bad publicity the country gets, Shakhtar Donetsk bucks the trend. They lifted the UEFA Cup in 2009 and their 6-2 aggregate demolition of Roma in the previous round was astonishing. They’re currently sitting pretty 12 points ahead of arch rivals Dynamo at the top of the Ukrainian league. Of course such success didn’t grow out of the ground. Obviously Shakhtar are rather well-resourced by their billionaire owner. But whilst it’s tempting to dwell on the rights or wrongs of where this money might have come from, there’s another rather interesting point to be made, which bucks the trend in today’s Ukraine. Whilst Shakhtar have been flying, the country has meanwhile been relegated from democracy’s ‘Premier League’ (the ‘free country’ status previously afforded it by Freedom House), tumbled down press freedom ratings and virtually languishes in the amateur league of the Global Competitiveness Index. So what is it that Shakhtar does differently?

A look at the team sheet tells us the roots of this success. The Shakhtar team that started both games against Roma contained only three Ukrainians. Of the six goals they scored, five were scored by Brazilians and one by a Czech. Now I’m not in any way out to belittle Ukrainian football. Ukraine has a fine historical pedigree in the game, going back to Dynamo Kiev’s European successes in the 1980s, or the Dynamo team that got so close to making the Champions’ League final in 1999. On one occasion the entire USSR football team was selected from Dynamo Kiev, and Ukrainian teams and players were heavyweights in Soviet times. They play a technical, passing game that has its good points. Nonetheless, Ukraine is 33rd in the (albeit slightly dodgy) FIFA World Rankings, so if you want to mix it with the best, you need to bring in the best, and that’s what Shakhtar have done. Whether it will be enough against Barcelona tonight is another question entirely, but there’s no doubt that the likes of Luiz Adriano and Jádson are top quality. Brazil produces the world’s best footballers, so it makes sense to recruit the best.

Sport is probably the ultimate meritocracy, and it’s laudable that Shakhtar have realised that in football you need to bring in the best people to do the job. But given the links between that very football club and the current ruling class, it’s difficult to understand why the same policy would not be best employed in some of the more important aspects of running the country. On the economy, why not bring in experts with a track record of successful economic reform, such as from Slovakia or Poland. On rule of law, why not bring in experts from countries which, for example, rank high on the WJP Rule of Law Index. The Germans could give pointers on how to run a de-politicized Constitutional Court or a successful National Bank. Foreign experts could be used to much greater effect in the preparations for Euro 2012. And so it goes on. The alternative is ineffective institutions run by poorly-qualified cronies ill-suited to their roles. The rampant cronyism of Ukrainian society means ignoring the people who might be best for the job in favour of the well-connected. That leads in the end to chronically ineffective management, such as was seen in the Scottish police, when the promotion of too many freemasons to leading positions led to officers needing to be brought up from England to solve major crimes.

To best illustrate the point, imagine that Shakhtar was run in the way that Ukraine is. Shakhtar is a Ukrainian team and should have Ukrainian players. As captain we’ll bring back our captain from 10 years ago when we were we were bottom of the league and judged to be a poor side. He was already in his 50s then and, at 63 looks well past it, but he’s a mate of the head coach so gets the nod. In midfield we’ll bring back another old hand. He was dropped by the previous coach but acts as an intermediary, contributing nothing to the team, but demanding half of the team’s wages for just standing in the middle. Up front we could put a mate of the Coach’s son. He looks decidedly overweight, has only ever played pub football and doesn’t feel up to attending the press conference to tell us how he’s going to carve open the Barça defence. The team is very likely going to bomb in every match from now on, but never mind, the club website and programme notes will still accentuate the positive and tell us that we shouldn’t expect better.
Posted by Jonathan Hibberd at 6:07 pm