After Christmas, rather than fly back from England like a normal, sensible person, I travelled back to Kiev from Budapest, stopping in Nyiregyháza, Záhony (a small railway town just on the Hungarian side or the Ukraine-Hungary border and possibly the most boring place ever), and then onto Mukacheve and Uzhgorod, the main towns of the Trans-Carpathian region.

Mukacheve is a nice, friendly little town lliterally at the foot of the Carpathians. The hills begin heading northeast, except for one solitary hill to the south on which the castle sits a short distance out of town. Ukraine being Ukraine, no maps were available anywhere and asking directions to said castle merely met with the response 'take a taxi', which I thus did. When I said to the driver that he could leave me at the bottom of the hill he replied 'no, don't worry' and in businesslike fashion drove me up the winding road, dropping me at the castle entrance, and I realised that this put him in a better place from which to pick up more business. The castle itself is in fine condition, and this could be down to Hungarian money, as pristine commemorative plaques from Hungarian organisations are scattered throughout the castle. What is interesting here is that each one is in both Hungarian and Ukrainian, and containing the same information, a much better arrangement than in neighbouring Romania where a small decaying plaque in Hungarian will be obscured by one twice the size or more in Romanian, or even worse, in Romanian and English, expounding politically-motivated diatribe. The tolerance in Ukraine may be a kind of careless tolerance, but it is tolerance nonetheless. On a cold and slushy day I found very little else to do after dark than head back to my room at the Hotel Star, get into some of my post-Christmas reading and get some sleep. At around one in the morning I awoke to the distant sound of Ukrainian carol-singers, it now being 7th January, which is of course orthodox Christmas. So in Dickensian fashion I stuck my head out of the window and took in Ukrainian Christmas songs and a final installment of seasonal cheer.

Hungarians will tell you that 'Ungvár' is a Hungarian city, but there's nothing very Hungarian about Uzhgoorod these days and in fact whereas in neighbouring Mukacheve you might hear Ukrainian (or Rusyn even?) and Hungarian as well as Russian, Uzhgorod has the feel of a town populated by foreigners. Now, if I can explain what I mean, I'm from Hertfordshire, which is also populated by 'foreigners', as in Londoners who moved out of the city and brought their city accent, way of thinking and lifestyle with them, with very little idea of the culture that existed prior to their arrival. A look at old books, or speaking to people whose roots are in the area expounds these differences. To call Uzhgorod a Hungarian city re-populated by residents of Kharkov might not quite be accurate, but the people seem to have little in common with the Slovaks across the border just 4km away.

Swanky Railway Station (so what??)

One arrives at the the city's amazingly shiny and impressive railway station (actually I arrived at the neighbouring bus station, but I always want to have a nose around the railway station). The condition of this immaculate facility is in such stark contrast to its surroundings that it invites suspicion, and sure enough there is a story that suggests this. In the hall of the railway station itself, the story is told of the former Transport Minster and head of Ukrainian Railways, who was found shot dead in his dacha (holiday home) in late 2004, in the throes of the Orange Revolution. It is not clear exactly whether he was shot for trying to call in election debts from the (then) defeated Viktor Yanukovich, or whether he commit suicide, afraid that 'regime change' would uncover corruption he may well have been involved in. Another possible explanation was that he had allowed trainloads of people in from Western Ukraine to support the revolution, whereas it was in his power to 'cut off supply' and instead merely ferry in Yanukovich yobs from the East to 'intimidate the revolutionaries', which he also did. Anyway, a loving tribute in the form of an information board detailing his achievements is there for all to see. These achievements might have included a scheme to speed up train travel between Poland and Ukraine, using a new system to overcome the problem of different track widths between the two countries (the wheel change process currently takes over an hour!) but this new system has never yet come to fruition (and border waits at the 'EU border' are getting longer rather than shorter). Another achievement is the shiny railway stations in many places around Ukraine, although most people know that it was in these impressive reconstruction projects that large amounts of money went 'missing'. The display is completed with what I understood to be the church where the poor chap's funeral took place.

The centre and obligatory castle

Again, the only foolproof way of finding anything was to jump in a taxi. The driver told me 'there are two centres'. He offered me two choices, the only word of which I understood was 'most', meaning of course 'bridge'. So I was dropped on the southern side of the pedestrian bridge, which forms an impressive gateway to the wacky 'Habsburgs on drugs' architecture of the northern bank. There are not a great deal of 'things to see' as such once one has wandered around for a few minutes. I did find a couple of churches, the Roman catholic church that seems to belong equally to the local Ukrainian and Hungarian populations, possibly an overspill of the devout catholics of Slovakia just across the border, not forgetting that 'Užhorod' was the easternmost major city of Czechoslovakia between the two world wars (of course most Ukrainians are either orthodox or Greek catholic, not Roman catholic). Then up to the orthodox church which is apparently almost always closed, as it was when I visited. From there the castle is another 200 yards away down a pretty street. One or two more Hungarian plaques were in evidence with their tell-tale ribbons in the red, white and green of the Hungarian flag. The grounds of the castle were open, despite it being 'Christmas Day' and again one is overwhelmed by the lack of information of any kind. I went onto the walls, and was mildly irritated not knowing whether I was looking at Ukrainian or Slovak hills to my left, I suspect Slovak ones. To my right was a little folk museum with Ukrainian-style houses. I was slightly miffed by the fact that souvenirs on sale at both castles were of Ukrainian souvenirs from 'Prekarpttya' (in front of the Carpathians) rather than 'Zakarpattya' (behind the Carpathians) where we in fact were. Rather like selling kilts in Kent or something like that. But I suppose it is Ukraine nonetheless. 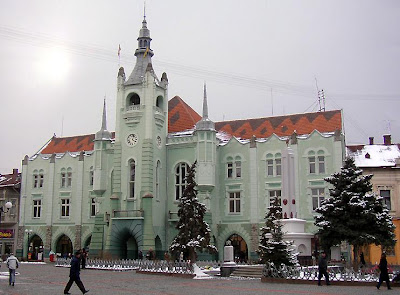 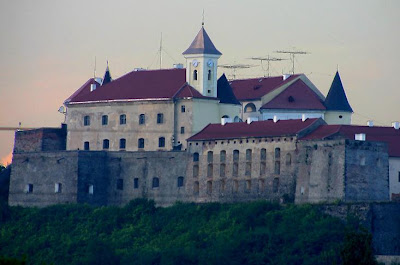 Pretty good post on Uzhgorod and Transcarpathia. I lived in Uzhgorod for three years (2004-2007) and did government-related work, mostly. Then I married a girl from there.

You're right about the train station: weirdly new and well-maintained. But it mostly came about in the mad rush before the elections in 2004 that triggered the Orange Revolution. Yanukovych visited numerous times to tout the new station that he and Kuchma were so nice to build for the people of Uzhgorod (and don't forget to vote while you're at it). They finished it, actually, after the election, but they really wanted it to be done in time.

Funny thing is that Uzhgorod, unlike the rest of western Ukraine, was pretty well split in its support for Yanukovych and Yushchenko. It's a weird, weird place.

Most of what you wrote was spot on, and that's pretty good for a visitor. Most English-speaking tourists I encountered in Uzhgorod were utterly shocked and flabbergasted at just about everything. They thought a little jaunt into Ukraine from Hungary would be nothing major. Well, it is a big deal.

Anyway, too bad you missed one little thing: On your jaunt between the Greek Orthodox church and the castle (on that cool little street with the big trees) lives a crazy old Englishman -- a good friend of mine. He woulda bought you a coffee. Next time...

Thanks for your comment-really cool to know that a few random people read it as well as my regulars! I've been living in Ukraine for 16 months now, in Kiev. I previously lived in Hungary for 3 years and Slovakia for one, so I feel like Zakarpattya is the unique melting pot of all the cultures I know. It's a lot like Transylvania in parts, but as you say, for Uzhgorod, weird is definitely the word. I'm on the drag between Kiev and Budapest quite often and would be delighted to receive an invitation to tea. :)

Jonathan - I saw this link through a Facebook Group and enjoyed the read. I have started doing Genealogical Research in this area and the pictures and descriptions have been great to put some modern day texture in this region. Thanks!