Is this what it takes to get Europe's attention back on the east? 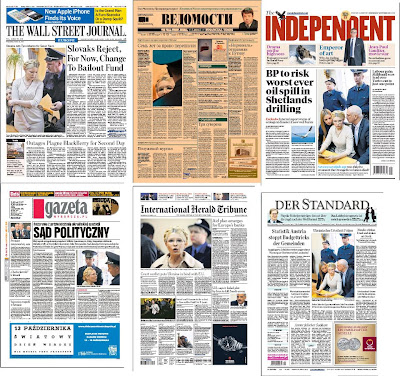 The sight of the forlorn Tymoshenko on newspaper front pages across the world has arguably given Ukraine the most exposure that it's had since the Orange Revolution. At EU level, it was telling that a europarl news item on a European Parliament plenary session which would have read 'MEPs to debate Middle East uprisings with Catherine Ashton' now read 'MEPs to debate Middle East uprisings and sentencing of Ukrainian opposition leader with Catherine Ashton'. Is this what it takes to get the EU's attention on to the problems on the eastern half of its own continent, rather than on Europe's external periphery. The willingness to prioritise emerging democracy in the southern neighbourhood over its survival in the eastern neighbourhood might have proceeded undeterred were it not for this very serious wake-up call.

Even more than Europe's diplomatic shortcomings, the Ukrainian President now seems to have come up with a spectacular inverted version of the famed 'yes man' Kuchma diplomatic policy, having managed to disenfranchise not only the Unites States and European Union, but Russia as well. Indeed, that the conviction centres on a gas deal countersigned by Russia's all-powerful de facto President is a prickly point, and it's very possible that the Russian Prime Minister considers it a personal slight (Putin has apparently said that he doesn't like Yanukovych, add to the well known fact that he 'personally detests' the Belarusian President Aleksandr Lukashenka-politics in this part of the world is always personal).

The world's newspapers have perhaps got the wrong idea. Tymoshenko is no Aung San Suu Kyi, even if the Ukrainian judiciary risks turning her into one in the eyes of many. It has been more soberly pointed out in some quarters that the 2009 gas deal did contain some quite serious violations. But these violations were made at a time of extraordinary pressure on the Prime Minister. Both Russia and EU states seem to be rather forgetting their roles in what transpired that January as a result of Russia shutting off the gas taps. They are also largely based on Soviet era laws, as is the precedent for the curious practice of a personal fine levied for a loss to the state budget. After all, nobody has claimed that Tymoshenko has personally helped herself to funds from the gas deal. What even happened to the Kyoto money we were talking about when she was first charged?

It's also in a sense not the point. Tymoshenko's party is the only genuine opposition left in Ukraine. Commentator Taras Kuzio claims that every other party feeds dierctly or indirectly into the Party of Regions power structure. Like Khodorkovsky in Russia, dismissed by many as 'no angel', the most obvious casualty is that of political pluralism in the state. It's doubtful that Tymoshenko has really been put away for technical reasons. Amongst various theories, one suggestion was simply that the President is sick of her endless ex-con jibes.

The news that further charges are going to be leveled against Tymoshenko is hardly going to help curry favour abroad. The new charges, of direct personal enrichment, are perhaps more to the point, but I would steer clear of that one, at risk of creating a precedent for looking into the ill-gotten gains of one's predecessor's personal enrichment following their fall from power.

So now we see a diplomatic squeeze on Ukraine from outside, but at the same time a domestic squeeze on Ukraine's population. New currency exchange laws and bans on loans in foreign currency are a case in point. Indeed, the new currency exchange rules have lead to currency exchange booths in central Kiev turning away foreign customers altogether. With Kiev's newly-renovated Olympysky Stadium set to host a friendly between Ukraine and Germany in November, one has to wonder how any Germany fans brave enough to make the trip are going to get on. Most likely, we'll see a facade similar to the one Russia put on when it hosted the 2008 Champions' League final, where the visa requirement was temporarily dropped to prevent the embarrassment of 70000 Brits queueing for Russian visas, and the notorious Russian police were suddenly immaculately-behaved, for 48 hours or so. It will be a great shame if Euro 2012 next summer turns out to be a similar cosmetic exercise rather than a lever for change and a chance for the country to adopt European norms in many areas. It has been suggested that the new currency rules are in fact a data-collecting exercise on the country's citizens which will soon be complete, for some unknown purpose.

On the subject of sport, an interesting aspect of the Tymoshenko detention is that it leaves a vacancy for opposition figurehead that may be filled by one of Ukraine's most popular public figures, boxer Vitali Klitschko, who has been boosting his media profile of late. Although he did not previously succeed in two attempts for the Kiev mayoral office, he has the distinct advantage that, unlike almost all the alternative figures in Ukrainian politics, Klitschko did not get to his present position through corruption. His time living in Germany also gives him a different perspective on how the country should be run. There are big question marks about how politically able he is, and whether he can overcome a fair amount of public scepticism about his ambitions, but if he surrounded himself with the right people he would certainly do no worse than the current incumbent, and might be the one to finally knock some heads together!
Posted by Jonathan Hibberd at 5:41 pm