Ratification of the EU-Ukraine trade deal may drag on a while, but it beats the dead end of the customs union.

Ukrainian politicians put their foreign counterparts to shame when it comes to empty or over-optimistic promises, but there appears to be something in the current administration's assessment that the EU-Ukraine Deep and Comprehensive Free Trade Area' DCFTA could be thrashed out by the end of the year, with EU sources admitting that real progress is being made. So goods will be sailing through a customs free Polish-Ukrainian border by the time of the Euro 2012 football championships? Whoa there, not so fast!

Even if Ukraine makes good on its pledge to satisfy all the terms by the end of this year, the agreement will still have to go through a lengthy ratification process, through the Verkhovna Rada, the European Parliament and finally, the potentially sticky wicket, the European Council of the member states themselves. That could mean the process being spun out into next year, possibly ending up on the back burner for a time whilst the elections to the European Parliament are being fought. If the wheels do keep moving, an optimistic forecast is that the agreement might come into force in 2015. With the various 10 year moratoriums on certain issues, the full extent of the agreement could then finally be realised by 2025.

So, why would Ukraine wait such a long time for the EU when the customs union with Russia, Kazakhstan and Belarus is already ready and waiting? Well, current events in Belarus give a good pointer there. The shortages of foreign currency that have fueled the crisis there owe a lot to the start of the customs union earlier this year. Belarus had to increase import tariffs on cars from the west as part of the agreement and, rather than wait for Ladas from friendly Russia to flood the Belarusian market, Belarusians rushed to get hold of cars from the west before the tariff went up, and that meant the need for foreign currency, which quickly turned into the chaos we see today with speculators from Ukraine and Russia flooding over the border to make a killing selling currency at vastly inflated rates. Enter now Russia itself with offers to buy up Belarus's key assets to dig them out of trouble, and it could be goodbye to pipelines and refineries, and a major handicap in the Titoist east-west balancing game at which Lukashenka has excelled himself in the past. And if Belarus wants to change the tariffs that started this whole mess? Well, between themselves and Kazakhstan they wouldn't be able to muster a controlling vote, as 54% of votes apparently belong to Russia, and incidentally, a lot of the revenue from the tariffs won't even go to Belarus, but to Russia. Rather than Ukraine looking to join, surely Belarus and Kazakhstan should be running for the exit door as fast as they can!

For Ukraine, there is plenty of real work to do, and not only on DCFTA. June 2011 was Yanukovych's proclaimed date for ticking the various boxes in the move towards visa free travel to the Schengen area for Ukrainians. Yet we are now told September 2011. The chief sticking point is the required introduction of biometric passports for Ukrainians. As so often in Ukraine, parochial self-interest threatens the greater good, in the form of a private company represented in the Verkhovna Rada which apparently produces the country's passports, and which is no doubt holding out for a greed-fueled windfall from the process. And we can expect such instances to remain the norm for the foreseeable future. Add to this the inability of Ukraine to see that a mere €150m of EU money is properly accounted for, and you would forgive those who remain sceptical.

Until the Ukrainians have to put pen to paper on the trade deal, we may see, as has been suggested in some quarters, a last minute rush to get hold of the country's assets via more of the country's ubiquitous dodgy privatisations, after which there is an idea that people, at least in theory, will start playing by the rules. Once signed, the emphasis will then be on compliance, and that could turn out to be the biggest hurdle of all. If in 2025 things have been ticking along well, and the EU has moved on and stabilised from its present traumas, they may finally be willing to talk membership. If however a ratified free trade deal is not complied with, then Ukraine's European aspirations truly will founder on the rocks, with only itself to blame. 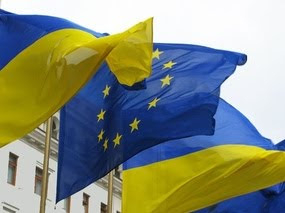 Posted by Jonathan Hibberd at 4:36 pm