Moscow Patriarch photoshops his way to popularity in Ukraine

More clutching at straws by the Russians

I wrote recently about the stumbling lack of progress Russia has had trying to sell it's customs union in Ukraine, against the opportunity to enter a deep free trade deal with the EU instead. I also mentioned the Moscow Patriarch's obsessive visits to Ukraine since his installation, far more frequent than those of his predecessor. Well it now seems the obsessiveness has reached new heights.

I was astounded to hear recently that, following his 9th May visit to Kharkiv, Patriarch Kirill's own website carried a photo of massed crowds in the city's Freedom Square which appeared to have been doctored. Compare the mass of worshipers in the first photo with the rather more subdued reception suggested by the second photo. 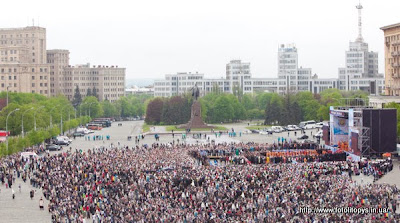 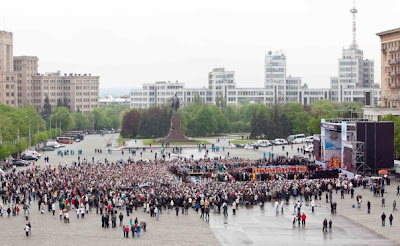 Unsurprisingly, the photo has since been removed from the official page. To my sensibilities, such an action by a church website would heap shame on any reputable christian organisation, but it perhaps tells us a lot about the real forces at work in the Moscow Patriarchate (?), and the importance of presentation in the current information war.

The fact is that most eastern orthodox Ukrainians take little interest in these squabbles, and many attend both Moscow and Kiev Patriarchate churches without giving it much thought. The real Kharkiv picture suggests relative indifference to the Patriarch's visit, even in the Russian-speaking heartlands. Perhaps Ukraine is suffering from Kirill-fatigue?
Posted by Jonathan Hibberd at 2:02 pm

The photo was removed IMMEDIATELY from the official Patriarchal website. I know because I looked several times at the photo-report on the Kharkiv patriarchal liturgy in the first few HOURS and the many days after the event. Perhaps some minion tried to pull a trick in Pat. Kirill's favor, but it is equally obvious that someone higher than said minion wasn't pleased, and had it removed.

This is peanuts compared to the constant barrage of propaganda -- much of it containing lies -- on the UGCC and UOC-KP websites.

I'm inclined to think the photo was pulled quickly because they got rumbled. Sad because all this has nothing at all to do with Christ's message.