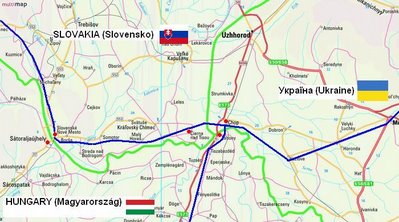 Ever since I started traveling around continental Europe I've been fascinated by the concept of overland borders. I mean, when you're from England (excluding the borders with the other home nations) you basically grow up with the view of the world that there is us, the sea, and after that other countries, foreigners etc. My most recent journey, a return trip to England for my sister's wedding, included several crossings, and took me to one or two slightly unusual places. I probably won't put loads of wedding stuff on a blog about Ukraine, but I will happily put a link to some photos and stuff when they appear. Anyway, it was fab. I'm afraid I have indulged my trainspotter instincts with the attached map (well, this is a blog afterall). Click on it to enlarge and fully appreciate its greatness.

Dual gauge track at Chop. I find that good. 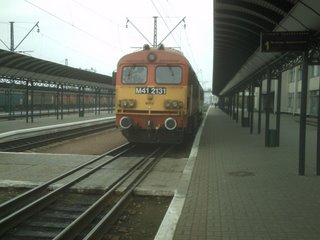 Chop and change
First stop after Kiev (17 hours after Kiev) was Chop (variously Чоп, Csop or Čop-depending on whether you are Ukrainian/Russian, Hungarian or Slovak). The place is crawling with mafia and, apart from that, there's not too much to say. That is, until you actually want to leave the place. Just before trying to board the train to Záhony (which turns out to be the equivalent dirgy border town on the Hungarian side) I was hauled up by passport control. The reason was that the Ukrainians themselves had not stamped the passport clearly when I entered the country at Kiev's Borispil airport. There then followed an endless stream of questions about what I had been doing in Ukraine, all completely unecessary as a much clearer version of the exact same stamp was on the immigration card right in front of them! I looked certain to miss my train but, with little more than a minute left, they handed me back my passport as if there had been no problem! Once you're on the train it rumbles along on a piece of track that more resembles an old goods siding than a major international rail route! At times the train dared not go a lot more than 5mph. But eventually I was back in Hungary and ready to board an intercity to the capital. Civilisation had arrived? Unfortunately no. The Nyíregyháza to Budapest intercity was running 90 minutes late!

. . . but that one's just for local trains. This is the serious one. 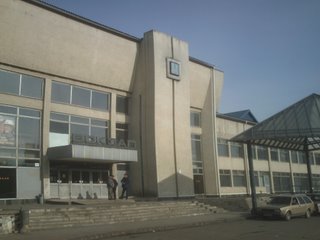 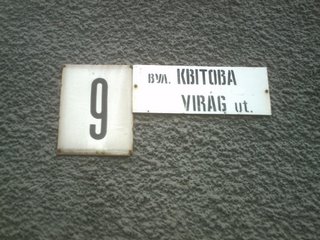 Pipes across the street, whilst unsightly, do provide useful advertising space. 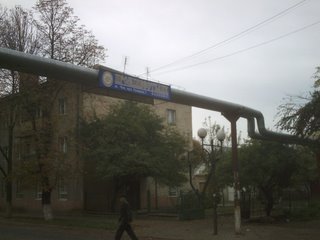 Wien there, done that (eventually)
The next overland border was the easily crossable one from Bratislava to Vienna. My new employers had requested that I pick up a work visa before re-entering the country. "But we don't need visas now", I said naively? "No, but if you don't have one you're working illegally", they replied. So, the orginal idea was to pick one up in the UK. Apparently the Ukrainian Consulate in Edinburgh accepts faxed copies of the employer's invitation. I salivated at the idea of a trip to Scotland thrown in at my company's expense, but alas the procedure would've been simply to despatch the visa to me via DHL. Anyway, I had already booked a flight back from England to Slovakia so we thought 'ok, we can do it there'. Turns out the Ukrainian Embassy in Slovakia never answers the telephone and is generally useless so, I thought, why don't I just go to Vienna? It's an easy one hour journey these days from Bratislava. As I made the journey early on the morning of 9th November I reflected that this border crossing, having been the iron curtain, just a decade and a half ago probably much closer resembled the Chop experience. How times change. Anyway eventually I found my way to the affluent suburb where the Ukrainian embassy is located, some walk away from the nearest S-Bahn station. Many countries have large embassies here because of the various international organisations located in Vienna with their manifold abbreviations. So I arived half an hour into the consular opening hours (9-12) and enquired about the fax from Ukraine. The person whose name I'd been given seemed to know nothing at all about me, and they insisted they had no fax, so I walked away dejected, and trying to send an email via my wap phone (internet cafés in Vienna are few and far between) to IH (my language school) along the lines of 'where is this fax???' Eventually I went back to the consulate and hunga round, hoping that my presence would at the very least distract them from their sudoku enought that they might actually look for this thing. There was a fax that was eventually picked up and examined, although it was so dark as to be unreadable. Eventually it was resent, and readable, and I had a pleasant few hours to kill before collecting my pasport/visa in the afternoon.

New place where we pich our tents
On the journey back from Bratislava to Kiev I took in both the Tatras and the Ukrainian Carpathians. I took the morning intercity train Kriváň from Bratislava to Košice and had a couple of hours to spare in the centre of Košice, which from previous visits I knew is never a bad thing. I was able to visit one of the unique Slovak baguette shops that have sprung up in recent times and are actually rather good. However I was already getting tired by this time and feared that my objective of getting to Uzhgorod (Ужгород, Ungvár, Užhorod etc. etc.) was a little too optimistic. Its delights would have to wait for another time. So I thought about where else I could stop for the night, and the answer was soon clear to me. If I left the train from Košice to Chop at Slovenské Nové Mesto, I could either find a guesthouse of somekind or other there or wander just over the border (a border crossing is barely 100 metres from Nové Mesto station) and pop over to Sátoraljaújhely in Hungary. Of course I did the latter, and fell decisively on my feet. A couple of locals mistook my examination of a building flying the Ukrainian flag for a look of confusion. They asked what I was looking for and fortunately, when it counted, my dormant ability to communicate in semi-reasonable Hungarian did not desert me. I was directed to a small 3-room panzió which suited my needs perfectly. Of course they were delighted that I could speak Hungarian and the following day made me the biggest breakfast I have ever seen, including a fantastic omlette with gratuitous amounts of szalonna (bacon fat) in it. It did the trick. And, it tunred out the Slovak station is actually closer to the centre of the town than the official Hungarian one, so it was an easy ten minute walk to the station the next morning, including passport checks.

Закарпатя (Trans-Carpathia)
So just over the border from Čierna nad Tisou I was back in Chop and more aggrivations at the border. Definitely guilty until proven innocent here. The ticket for the 17 hours back to Kiev in a four-bed compartment was rather fun, and absurdly cheap (around 6 pund 50 nto cross half the country!). I was travelling with a lady who was a scientist of some kind, and who had been doing some lab work in Bratislava. At Mukacheve (Мукачеве, Мукачів-the Rusyn name!, or Munkács) we were joined by two Russian-speaking locals, a father and son. The son was of to make some money in Russia.Anyway the Carpathians were impressive, as I already knew of course from many trips to Romania. My friends and I had been discussing what Zakarpattya would have been called historically (by the Hungarians). Maybe Felvidék (meaning 'high country'-an old name for Slovakia, upheld by more patriotic Hungarians)? As we travelled through the mountains, it seemed a great deal more like Transylvania. When I said this to my Russian-speaking fellow traveller he replied very firmly "this is Transylvania". He had lived at one time in the northern part of Maramureş/Máramaros, the northern half of a historical county of the Hungarian kingdom that ended up partitioned between Ukraine and Romania after World War I. He and his mother told us about the flooding of the Tisza a few years ago (doubtless a scene repeated in 2006) which effectively removed the Ukraine-Romania border for several days!A journey with Ukrainians is always interesting. I can't imagine being asked about my salary and personal life on any train journey in England. Eventually as we approached Lviv the Carpathians disappeared into the night and people got themselves into bed. It was finally explained to me that the large heavy duvet was in fact a mattress designed to be placed over the bunk. Somehow I had survived three previous trips on Ukrainian trains without realising this! So I arrived at Kiev-Pass station at 5:23 the next morning, was met by the school handy man from International House, and so begins Chapter 2 of my Ukrainian adventure.

Posted by Jonathan Hibberd at 11:41 pm