. . . and spring gave summer and autumn a miss and went straight on into winter

To misquote Monty Python. Maybe not quite true, but de-camping to England in mid-July was, weather wise, a mistake. I came back in September hoping to benefit from the Indian summer (old women's summer) that is common in this part of the world but had no luck there either. In late October temperatures plunged and they've not really recovered at all since. As I write the weather forecast for the next 2 weeks is a sea of blue, with the maximum temperature forecast is -2. But I've enjoyed the autumn here and thought I should put in some brief notes.

I've been blessed enough to be living this year in the slightly more refined district of Obolon', well, refined by Ukrainian standards. Although it's a clear 3rd behind the historic Podil and Pechersk districts it's noticeable here that the streets are cleaner, the supermarkets are better, and cars even slow down when you cross the road! I've had very few problems thus far with hot water etc. and it's been a big weight off my mind that everything seems to work.

I've managed a couple of trips out of town since I got back. I went with a few colleagues up to Chernighiv, about two hours to the north by bus, heading towards the point where the borders of Belarus, Russia and Ukraine meet. It's good to be able to describe somewhere here, without reservation, as a nice place. People there are genuinely friendly, the city is leafy and surprisingly easy on the concrete. The kind of place one wouldn't mind starting a language school perhaps (?). These days one always visits these places with an exploratory feeling somewhere in the background. We also ate an entire carrier bag full of doughnuts. 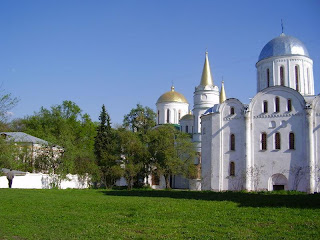 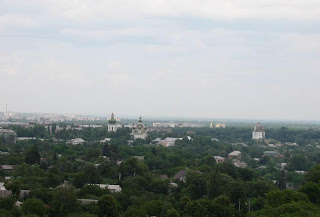 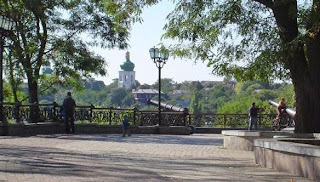 The pleasant surroundings of Chernighiv

I'm in love with Ukrainian ballet

I went to the ballet for the first time in my life in October. The cost was negligible by British standards, about 1 pound 50 for a seat 'up in thee Gods'. It was a ballet with a rather surreal storyline called Le Corsaire, with music by Adolphe Adam, who I can't confess to having heard of. But in this case the music took second place. I watched absolutely mesmerized as the surreal dreams of a drunken sailor, through rough seas and Arabic harems unfolded through the grace and poise of the dancers. I never knew this was something I could get into, but I've since been again, to La Sylphide and watched the beautiful dainty fairy's wings pop off and her dead body being carried away. I'm well into this.

It sounds wonderful to be settled in a city with regular Champions' League football, but this year's CL campaign rivals England's Euro 2008 qualifying campaign for wretchedness. If you don't want to know the score (or don't care about football) look away now:

Of course the 'pick of the games' was the home game against Manchester United, but I found this to be a slightly surreal occasion. English football has rocketed in popularity over here in just the last 2 or 3 years, and whereas a few years ago teams from all over Europe came here just to be turned over (for example, as Arsenal were 3-1 way back in 1998, and 2-1 in 2003), now there is an unhealthy amount of respect for the opposition. It didn't help that UEFA safetaphobia had closed off both ends of the stadium, and it also probably didn't help that they'd put up the ticket prices too 100 UAH. That's just 10 pounds, which is obviously a bargain for watching Man U play by English standards, but pricey for a lot of the locals. The crowd was full of people who had turned up to admire Fergie's boys. The Dynamo Ultras in one corner, whilst doing their team proud, resembled more a group of vociferous away fans. Of the 4-0 away defeat, Alex Ferguson said "Kiev came with the intention not to get too embarrassed", a comment I've not heard him make about any other team. Ukraina tv actually dropped the final game from their schedule. 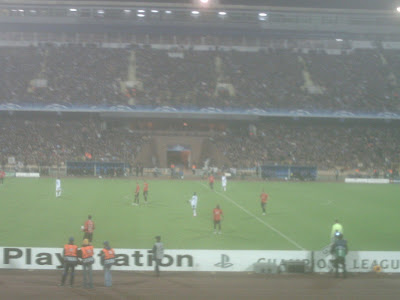 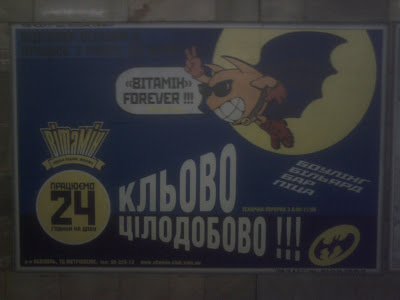 Clever reference to how 'VITAMIN' written in Cyrillic looks almost like the name of a superhero
Posted by Jonathan Hibberd at 2:52 am