Re-Packaging of Almost Finished Infrastructure Projects Creating the Illusion of Progress in Kiev (?)

A transport infrastructure revolution for Ukraine is long overdue

At first glance, there seems to be a bonanza of new transport infrastructure across the capital. There’s the so-called ‘new bridge’ in Podil (it’s a flyover), the apparent completion of the Moscow Square road junction works, a new terminal at the airport and at least THREE rail-related projects. Terminal F at Boryspil airport is nothing spectacular compared to, for example, the outstanding terminal the Portuguese built in Porto for Euro 2004 but, let's face it, for Ukraine it's not bad. The new government’s eagerness to take photo opportunities at these recently completed transport projects is understandable.

Party of Regions advertising for the local elections featured the newly ‘completed’ new railway bridge across the Dnipro in Kiev. The tv screens in the carriages of the Kiev metro (which show, among other things, animal funnies, anecdotes and news shorts) have in recent months contained newsreels highlighting the progress of various projects, including road repairs, a new Kiev suburban railway station at Livy Bereg and the President travelling on the inaugural train on the newest section of Kiev’s metro (it's not yet open to the public). An item this week shows workers busily laying tarmac with the benign communist-sounding headline ‘preparing for the winter’. At the reopening of the renovated fast tram line on the west side of the city, Prime Minister Azarov, in the paternalistic style beloved of the Kremlin, says to his workers "let's finally commission it on March 1".

However, on visiting the tramline myself today, it seems there is quite a bit of finishing to be done, and the reopening might have been slightly premature. At least three of the stops are still closed and nowhere near completion, and over half of the stops that are open are only partially completed, with passengers effectively standing in the middle of building sites waiting for their trams. Not that the work carried out isn’t, in its way, impressive. The newly renovated trams are clean and more modern looking, if not quite comfortable as such, and each tram includes a low floor section in the middle, which is reached by level access from proper platforms. Platforms for tram stops are of course standard practice across most of Europe but in Ukraine, where its customary to just clamber up from the trackside, it’s almost a revolution (I should however mention that, as almost none of the stations have step-free access, it will be of little use to the truly mobility-impaired, but now I'm getting fussy). The stations that are completed are nicely done, with metro station style barriers. But of course all these technical plusses were not thought up in the past 8 months of the Yanukovych administration, and in fact were by some miracle carried out under Kiev's much-maligned mayor Chernovetsky, who is now rapidly being sidelined under the new regime.

Being honest, transport construction projects is not an area of knowledge in which the average person in the streets excels. From my own experience having a degree in transport and logistics and working in transport journalism, the general public has little idea how long it takes to bring an infrastructure project from planning to completion. So it’s actually quite easy to persuade people that this has all been done in the last 8 months. And in a way, it has. We’ve become accustomed here to living with seemingly perpetual building sites, with often little sign of work being carried out. The sight of the Olympisky stadium complex with workers scurrying all over it is quite the culture shock in Ukraine. But we all know why construction projects here tend to drag on. It is normally a safe bet that somebody is laundering money through these sometimes lavish and leisurely-paced construction projects. A former close associate of Yanukovych-the now deceased former railways minister-is said to have performed a similar trick in the extensive reconstruction of some of the country’s railway stations.

The point is that the previous powers that be left plenty of partly-finished projects lying around which, with a kick up the arse to the relevant people, could pretty easily be turned into finished projects. And it’s nice to see these projects being completed rather than continuing to drag on. I remember hearing that the Moscow Square works were going to drag on into 2012, the year that, more than ever before, Kiev will be on show to the rest of Europe. So, credit where credit is due to the new government.

However, let’s not get ahead of ourselves. The new railway bridge, which incorporates a new road crossing, is not in fact complete. The sole user of another drawn out construction project, a double deck metro and road bridge via the north end of Trukhaniv island, is apparently the presidential motorcade. The fast tram line still requires work and there is a new terminal at Boryspil to complete for Euro 2012. And visitors to the country will not pull any punches with what they see when they get here.

What we don’t want to see is infrastructure development that is in fact more spin than substance. President or Prime Minister Putin (I’m not sure which, let’s just say ‘leader’) apparently once carried out an opening ceremony for a section of the Trans-Siberian highway which in fact couldn’t be driven across due to a number of uncompleted bridges. And if healthy oil and gas revenues doesn’t buy you decent infrastructure, I don’t know what will.

Ukraine needs to take a serious look at infrastructure provision for the future. Kiev’s ‘Miska Elektrichka’ project is a good start (it’s actually ‘elektropoyizd’ in Ukrainian, but granted that wouldn’t be as catchy). Talk of a real suburban rail system for Kiev which aims to replicate the situation in other European cities is really encouraging, and one only dreams that it might be of the pedigree of the S-Bahn systems in Germany or the RER in Paris.

Ukraine also needs motorways. It was a stroke of genius to make a section of motorway from Boryspil airport to Kiev to impress visitors, but anyone who has driven beyond the airport turning will know that this is not the situation throughout the rest of the country. Private companies would gladly come to Ukraine and construct toll motorways, as long as land could be compulsorily purchased and as long as those companies could be left to get on with it. Alas, the reality would be that murky figures would come out of the woodwork demanding that the work be carried out by Ukrainian companies and most likely planned to proceed at the leisurely pace that I described earlier. The result however, is little progress on building a motorway network for Ukraine, and many investors who will stay away if there isn’t one.

The other thing the country needs, but which admittedly sounds pie in the sky, is high speed rail (you must forgive me if the article from here on indulges my transport interests). Technically it wouldn’t be too difficult to do. Ukraine has open country that would require few tunnels or viaducts, there’s no need for expensive TGV-type trains-even 200km/h trains would be a lot quicker than anything currently running in Ukraine. Electrification has proven to be a lot cheaper per mile than in other countries. And the basic fact is that the current rail network doesn’t meet a lot of the country’s needs. There is no direct line from Kiev to Odesa for example, and a new line to Poland which allowed Warsaw to be reached in 4-5 hours, Berlin in 6-7 etc. would bring Kiev tangibly closer to Europe. They’re even developing high speed rail in Turkey, so why not Ukraine? Having said all that, I don’t expect any movement on this for a good 10 years or so.

Much more likely is arrival in Kiev of Russia’s fancy-looking Sapsan trains, but beyond the sexy lines, we shouldn’t get that excited about this. The Sapsan trains, which mainly do the Moscow-St. Petersburg run at present, are a derivative of the Siemens ICE/Velaro which operate in Germany, France and Spain at 300 km/h, yet there is not one single stretch of track in Russia where this speed is possible, the maximum being 200 km/h on some sections. That’s an incredibly expensive train to be using at only two thirds of capacity. The purchase of the trains is almost certainly a crony capitalist offshoot of the Nordstream gas pipeline deal, and it seems a small price to pay for being able to plug an umbilical gas chord into Europe’s largest economy. A Russian Railways employee even warned friends not to travel on the trains as they are travelling on infrastructure not even properly modernised for these speeds.

But the point is, to Joe Public, a train is a train, and Sapsan will no doubt start running to Kiev to much fanfare. And thus the potential for spin amongst the unwitting general public is endless. But if we see real modernisation here in the next 5 years, I will cheerfully eat my words. Finishing off a few odds and ends is a good start, but more of the same please!

Indulging my trainspotter instincts, here is a suggested high speed rail network for Ukraine (I know, I know, dream on...): 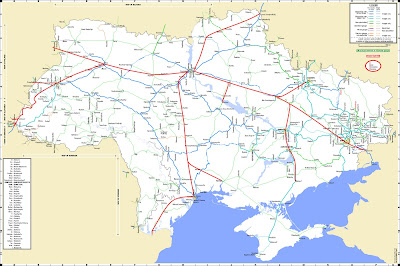 Posted by Jonathan Hibberd at 9:11 pm